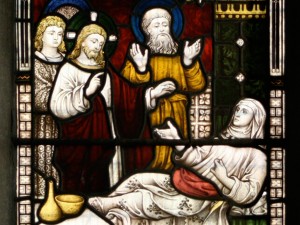 “the Gospel, that has come to you“
Who do you take your troubles to? Jesus’ disciples freely brought their troubles to him because they found him ready and able to deal with any difficulty, affliction, or sickness which they encountered. When Simon Peter brought Jesus to his home for the Sabbath meal (right after Jesus preached in the synagogue in Capernaum), his mother-in-law was instantly healed because Jesus heard Simon’s prayer. Jesus could not avoid drawing a crowd wherever he went.
Jesus’ numerous healings and exorcisms demonstrated the power and authority of his word, the “good news of the kingdom of God.” When he rebuked the fever, it immediately left. When he rebuked the demons, they left as well. Why did the demons shudder at Jesus’ presence? They recognized that he was the Christ, the Son of God and that he had power to destroy their kingdom by releasing those bound by it. Jesus came to set us free from bondage to sin and evil. Do you seek freedom in Christ and trust in his power to set you free, however that may be?
(Adapted from Don Schwager)