What do you suppose Abraham was doing while Sarah was preparing the bread and cheese and the servant was preparing the steer.  The meal didn’t just happen like it does at the drive thru window.  Sarah had to prep and bake into rolls three measures of fine wheat flour.  Do you know how those three measures are? Not three handfuls.  It’s equal to a half bushel.  That’s nearly 30lbs.!  And the steer was chosen by Abraham, but prepared by his servant.  Even though the Scripture says he did it quickly, that means that he had to slaughter it, cut the meat and cook it.  We’re talking hours and hours.
So at one point Abraham was busy welcoming them.  The next we hear he is serving them as they ate.  But what do you suppose he was doing the rest of the time?  He was sitting with them, asking them questions, listening to them and conversing about his life and theirs.
Do you see what happens in the Gospel?  Martha, like Sarah and the servant, was prepping the food.  Mary, like Abraham in the in-between, was sitting at the Lord’s feet listening to him.  And we know that Abraham’s visitors were no mere men.  One was the Lord and the other two were angels, as Scripture tells us.
So we see that it is important to go out of our way to welcome the Lord.  It is important to serve him with the finest we have.  And it’s important to sit and listen, asking him questions, telling him about our lives and listening as he tells us about his own.
Prayer and service, like Blessed Mother Teresa showed us, are a both/and and not an either/or. 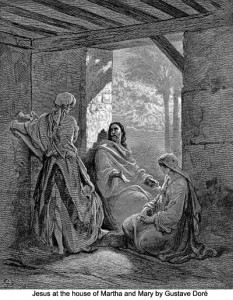 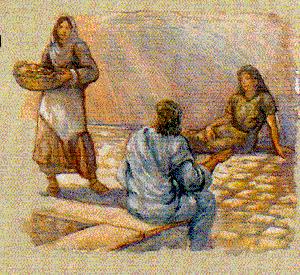