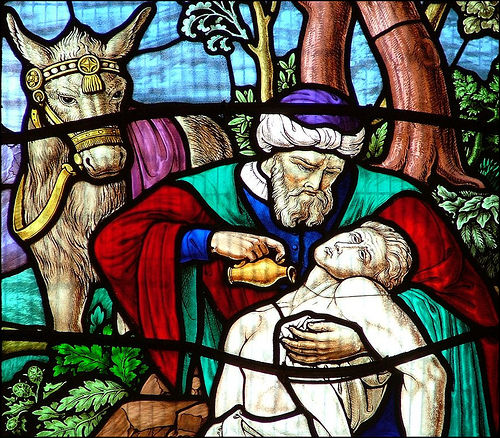 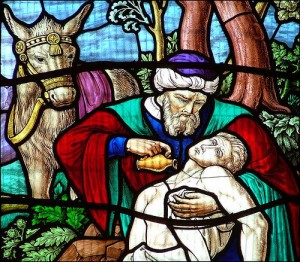 “He answered, ‘The one who treated him with mercy.’ Jesus said to him, ‘Go and do likewise.’”
We are to treat others with mercy, regardless of who they are or what they’ve done, Jesus shows us.  We hear in the parable that the man fell victim to robbers on his way from Jerusalem to Jericho.  Most likely he was traveling alone, others he would have not been attacked.  If he had not be alone, his friends most likely would have returned.  Traveling the dangerous road through the desert hills to Jericho alone was imprudent at best, deadly at worst.  His was almost a worst-case scenario.  Not a very bright idea at all.
Yet the good samaritan treats him with extraordinary mercy, caring for him, transporting him, paying for his lodging and healthcare, and even promising to visit him on his return.  Jesus’ point isn’t obviously, “Thou shall travel the Jericho road with companions next time, dummy.”  His point was that we treat everyone, regardless of religion or race, regardless of their decisions in life, with mercy.  “Go and do likewise,” he says.
What kept the Levite and the priest from showing mercy?  Who knows.  For the priest, his piety may have gotten in the way of his charity.  He may have been too worried about becoming “unclean” by touching the man.  For the Levite, maybe he was prevented through fear.  It could have been that he thought if he helped, he might be attacked as well.  What are the things that keep you from showing extraordinary mercy?  Fear, misplaced piety, busyness, judgement, prejudice, public opinion, anger toward the victim, laziness, vengeance, pride (thinking you’re too good to show a specific kind of mercy), apathy, cynicism (it wouldn’t help anyway), intellectualism, doubt…?
The scholar of the law had to have been an intelligent man to do what he did. We see, however, that he was too much in his head and not enough in his heart.  Jesus helped him move from his head to his heart.  Will his words help you do the same?
_________________

An hour after writing this, I read this story about Pope Francis which illuminates the point of the reflection all-the-more. It comes from Vatican Insider.

Argentinean media have reported on the correspondence between Francis and Patricio Fontanet, a rock singer who was put behind bars for causing the blaze which claimed the lives of 194 young people in a Buenos Aires nightclub

“You will have days when you feel down, but don’t be afraid. Be strong.Everything passes.” These were the words Francis addressed to rock singer Patricio Fontanet who was admitted to a clinic some time ago after being diagnosed with severe depression. The singer was found to be responsible for a fire which started in Cromagnon nightclub in Buenos Aires on 30 December 2004, killing 194 young people.
Today, Argentinean media published the Pope’s reply to a letter which the lead singer of Callejeros sent him a while back. “I got your letter three days ago. Thank you,” Francis wrote. “Though I am physically far away I am close to you and your group in spirit. It is as if I can hear everything you hear and say, from a distance.”
Straight after the tragic incident in Cromagnon nighclub, Bergoglio, who was still Archbishop of Buenos Aires at the time, met the band and asked them “not to give up.” Fontanet is carrying out a seven year prison sentence.