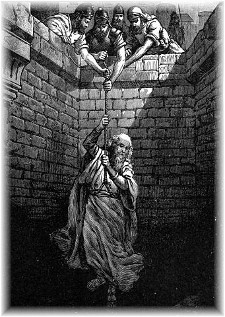 “There was no water in the cistern, only mud, and Jeremiah sank into the mud.”
He sank into the mud.  Jeremiah has been at it again. There is a war going on and Jerusalem is surrounded with the army of Babylon.  He has been telling everybody to surrender and all will go well.  Jerusalem does not surrender.  And all does not go well.  In fact, it goes very badly.
In the second reading, the listeners are “surrounded by so great a cloud of witnesses”.  Surrounded by these holy ones, martyrs, Christians are encouraged to surrender “every burden and sin that clings to us”.   “In your struggle against sin you have not yet resisted to the point of shedding blood.” Jesus did.  The martyrs did. We have not yet surrendered that fully, as the writer says; most of us won’t have to shed blood.  But we still have more to give to God.
The Gospel is the conclusion to the chapter from which we have been listening these past few weekends. We have heard about the dangers of greed and about the followers of Jesus who must stay awake, attentive, and responsive as servants of the serving-Lord. These verses have been dramatic and hard to hear. Well, get set for the dramatic climax.

Jesus, again speaking to his disciples with the crowd hanging around, tells them that he, who proclaimed the blessedness of the peacemaker, has come “not to establish peace on earth.” “Division” is his blazing, heart-driven desire. He refers to this as a “baptism” with which he wishes to immerse the earth.
Our reading concludes with examples of family unity which will be split. This does not sound very appealing and who would want to follow such a prophet as Jesus. As with Jeremiah, Jesus is calling for a decision to surrender which might —no will— cause separation, even within loving families.
King Zedekiah had to make such a decision and the followers of Jesus have all had to do the same.  Making decisions is the natural process for us humans; we make thousands of them each day.  We are invited to live lives less dominated by greed and possessiveness.  We are invited to surrender that in us which is bad to that/He which is Good. Surrendering to the unknown future is not easy.  We may end up sinking in the mud for a time.  We may end up on a cross of sorts.  But both Jeremiah and Jesus were lifted up in their own ways.  And with a surrender to God will always come an eventual victory.
This was a lesson not learned by Jerusalem, surrounded by Babylon. Jerusalem did not surrender and so was destroyed.  Will you learn the lesson of surrender that leads to victory- over and over again?
(adapted from Fr. Larry Gillis, SJ)