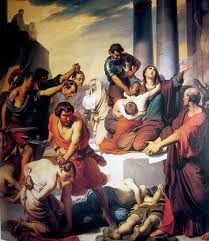 This reading from Maccabees has the clearest Old Testament statement of faith in the resurrection of the body and the afterlife. It reflects the piety of a lay group which evolved into the Pharisees, a group who resisted the rigid conservatism of the Jerusalem priests and who firmly believed in the resurrection of the dead. This belief did not evolve out of books or scholarly debate, but from radical trust in God’s fidelity and perhaps also from contact with neighbouring peoples, where belief in the afterlife was already well established.
The faith of the Maccabean mother rested solidly on her conviction of God’s fidelity to her and her seven children, which would surpass the barrier of death and the tomb. In a vibrant declaration, the mother linked her faith in God’s creation of the universe with trust in God’s ultimate justice. Creation, pregnancy and rebirth are linked together in her thought: God loves his creation with the same concern as a mother for a child in her womb, and this divine love surrounds a faithful person even through persecution and death, leading to a new resurrection.
(Adapted from ACP) 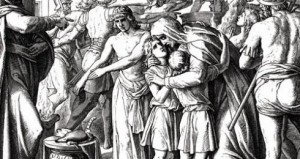