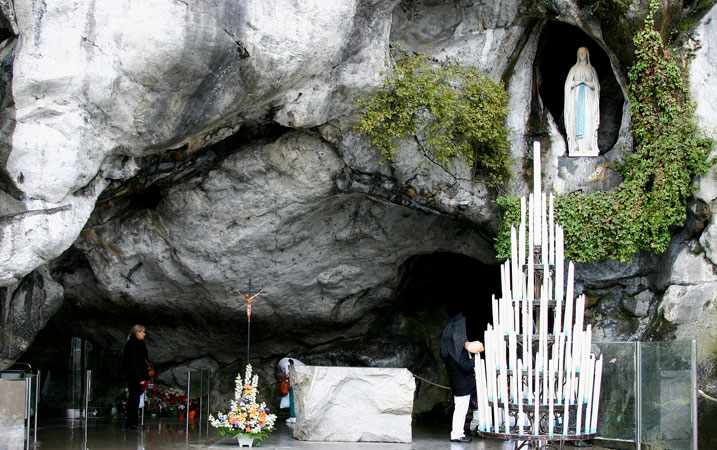 ROME via Crux— Pope Francis is directing the Catholic Church to promote and value popular religiosity, which every year sees millions of pilgrims flocking to shrines to entrust themselves and their loved ones to the Virgin Mary and the saints.

Such time-honored grassroots devotion, Francis said, is a genuine form of spreading the faith.

“In the shrines, in fact, our people live a deep spirituality, that of the piety that through centuries has reflected the faith with simple, but very meaningful, devotions,” Francis said.

The pope’s words on Thursday came as he met with thousands of men and women engaged in pilgrimage work at Catholic shrines who gathered in Rome Tuesday through Thursday for a jubilee celebration as part of the pope’s Year of Mercy.

It was the first such celebration for a particular group during the jubilee, with scores more to follow before the special year wraps up on Nov. 20.

Unpacking the vocabulary, a “shrine” is defined under Church law as a church or other sacred place that has the approval of the local bishop and is visited by the faithful as pilgrims.

A shrine is always dedicated to a particular devotion. It can be the burial place of a saint, such as St. Olav’s Shrine in Norway. Others were built at the sites of Marian apparitions, such as Lourdes in France or Garabandal in northern Spain.

More commonly, a shrine is established as a center for some particular devotion, such as the National Shrine of the Immaculate Conception in Washington, DC.

Millions of people around the world visit Catholic shrines each year. The one dedicated to Our Lady of Guadalupe, in Mexico, is visited by an estimated 10 million faithful annually. Lourdes, in France, draws 6 million.

The Shrine of Our Lady of Knock, in Ireland, attracts close to 2 million. Even though it has no official recognition from the Vatican, the Marian shrine in Medjugorje, in Bosnia, welcomes a million pilgrims each year.

In the pope’s home country of Argentina, the Basilica of Our Lady of Lujan welcomed more than 1 million people on Oct. 4. Most of them had walked the 40 miles separating Buenos Aires from the shrine as part of an annual youth pilgrimage.

When he was still the cardinal of Buenos Aires, Jorge Mario Bergoglio would often join the pilgrims to hear their confessions and to offer advice.

A man adjusts the crown on a statue of Our Lady of Guadalupe Dec. 6 outside the basilica named for her in northern Mexico City. The national patroness remains important in Mexico as source of spiritual inspiration, but even nonoreligious people identify with her.
More than a saint, Our Lady of Guadalupe represents Mexican identity
The shrine at Medjugorje where six young people said Mary appeared to them daily starting in 1981.
Why Medjugorje matters
Pope Francis warns pilgrims: ‘Don’t get conned — salvation is free!’
Francis long has valued these expression of popular piety that have kept millions flocking to shrines as an expression of the people’s faith, seeing them not merely as quaint or kitschy, but rather a touchstone for both theology and pastoral activity.

He said as much Thursday when he told the thousands gathered in the Vatican’s Paul VI Audience Hall from Peru, England, Germany, Poland, Mexico, Ireland, Portugal, and the United States that pilgrimage to shrines is “the most eloquent expression of the faith of God’s people.”

He also warned those who work at shrines not to assume that people who go on pilgrimages live a “mass” spirituality, meaning that they’re just going through the motions.

In the shrines, in fact, our people live a deep spirituality.Pope Francis

“Each [pilgrim] brings a special wish in their hearts, a prayer,” he said.

During his overseas trips as pope, Francis has made a point of honoring local Marian devotions and saints, visiting major shrines in virtually all of his 11 international journeys to date.

During his visit to the United States last September, he went to the National Shrine of the Immaculate Conception in DC to celebrate the canonization of St. Junipero Serra, the first person ever to be made a saint on US soil.

In November, when he was visiting Uganda during a three-nation African tour, he visited the Uganda Martyrs Shrine in Namugongo to celebrate Mass on the very spot where some of this nation’s first Christians were burned to death for adhering to their beliefs.

Next February, when he visits Mexico, one of the first appointments in his busy agenda is a stop at the Shrine of Our Lady of Guadalupe, one of the most-visited Catholic pilgrimage sites in the world.

Last year, when he announced that he would visit the US in September, he said he wanted to enter the country from the border, through Ciudad Juárez, to make a point regarding immigration. But he ultimately ruled it out because he wouldn’t be able to make it to Guadalupe on the same trip.

“You know that going to Mexico without going to visit the Madonna [of Guadalupe] would be a drama. A war could break out!” he said on the plane back from the Philippines in January 2015.

Although not every Catholic shrine is dedicated to the Virgin Mary, Francis seems to have a soft spot for those that are.

For example, when he was scheduled to go to Rio de Janeiro, Brazil, to participate in a youth festival back in 2013, Francis requested a change in the agenda to visit Our Lady of Aparecida, a place he’d visited in 2007.

On the plane back from Africa last November, he told journalists that he’s considering an invitation to visit the place again in 2017. He’s also voiced his desire to visit the shrines of Our Lady of Fatima in Portugal and Lourdes in France.