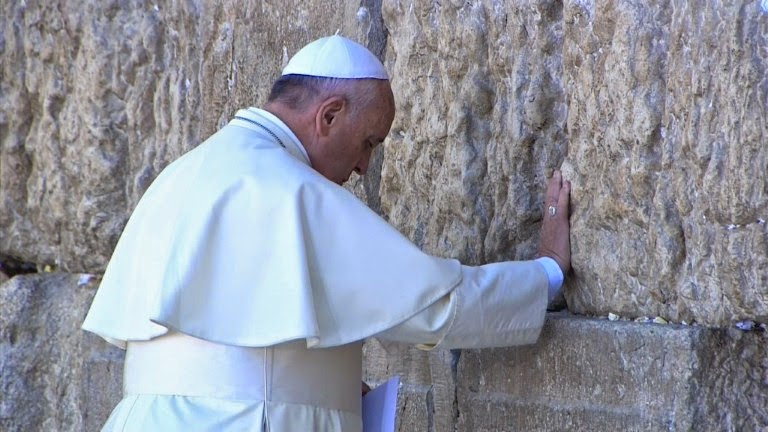 Vatican City, 25 May 2014 (VIS) – At 8 a.m. the Pope transferred from Temple Mount to the Western Wall, or “Wailing Wall”. Fifteen meters high, this wall is a place of worship for the Jews for historical and religious reasons, and is linked to numerous traditions such as that of leaving prayers written on small pieces of paper between the blocks of the wall. Francis was received by the Chief Rabbi, who accompanied him to the wall. The Pope prayed in silence before the wall and, like his predecessors, left a piece of paper on which he had written the Lord’s Prayer; he said, “I have written it in Spanish because it is the language I learned from my mother”.

He then proceeded to Monte Herzl where, in accordance with protocol on official visits and assisted by a Christian boy and girl, he left a wreath of flowers in the Israel national cemetery at the tomb of Theodore Herzl, founder of the Zionist movement. The Holy Father also strayed slightly from his itinerary to pray at a tomb for the victims of terrorism in Israel.

He then traveled by car to the Yad Vashem Memorial, a monument built in 1953 by the State of Israel to commemorate the six million Jewish victims of the Holocaust. Along with the president and director of the Center, the Pope walked around the perimeter of the Mausoleum before entering the Remembrance Hall, where he was awaited by the president, the prime minister, and the Rabbi president of the Council of Yad Vashem. Inside the Hall there is a monument with an eternal flame positioned in front of the crypt, which contains several urns with the ashes of victims of various concentration camps. The Pope lit the flame, placed a yellow and white floral wreath in the Mausoleum and, before his address, read from the Old Testament. He then spoke briefly about strength and the pain of man’s inhuman evil and on the “structures of sin” that oppose the dignity of the human person, created in the image and semblance of God.

“’Adam, where are you?’. Where are you, o man? What have you come to? In this place, this memorial of the Shoah, we hear God’s question echo once more: ‘Adam, where are you?’ This question is charged with all the sorrow of a Father who has lost his child. The Father knew the risk of freedom; he knew that his children could be lost… yet perhaps not even the Father could imagine so great a fall, so profound an abyss! Here, before the boundless tragedy of the Holocaust, that cry – “Where are you?” – echoes like a faint voice in an unfathomable abyss…

“Adam, who are you? I no longer recognize you. Who are you, o man? What have you become? Of what horror have you been capable? What made you fall to such depths? Certainly it is not the dust of the earth from which you were made. The dust of the earth is something good, the work of my hands. Certainly it is not the breath of life which I breathed into you. That breath comes from me, and it is something good.

“No, this abyss is not merely the work of your own hands, your own heart… Who corrupted you? Who disfigured you? Who led you to presume that you are the master of good and evil? Who convinced you that you were god? Not only did you torture and kill your brothers and sisters, but you sacrificed them to yourself, because you made yourself a god.

“Today, in this place, we hear once more the voice of God: “Adam, where are you?”

“From the ground there rises up a soft cry: ‘Have mercy on us, O Lord!’ To you, O Lord our God, belongs righteousness; but to us confusion of face and shame.

“A great evil has befallen us, such as never happened under the heavens. Now, Lord, hear our prayer, hear our plea, save us in your mercy. Save us from this horror.

“Almighty Lord, a soul in anguish cries out to you. Hear, Lord, and have mercy! We have sinned against you. You reign for ever. Remember us in your mercy. Grant us the grace to be ashamed of what we men have done, to be ashamed of this massive idolatry, of having despised and destroyed our own flesh which you formed from the earth, to which you gave life with your own breath of life. Never again, Lord, never again!

“’Adam, where are you?’ Here we are, Lord, shamed by what man, created in your own image and likeness, was capable of doing. Remember us in your mercy”.

The Holy Father concluded his visit by speaking with some Holocaust survivors and signed the Yad Vashem Book of Honour, where he wrote: “With shame for what man, created in the image and likeness of God, was able to do. With shame that man become the patron of evil; with the shame for what man, believing himself to be god, sacrificed his brothers to himself. Never again! Never again!”

He bid farewell to the chorus and the authorities who had greeted him upon arrival, and left by car for the Heichal Shlomo Centre.