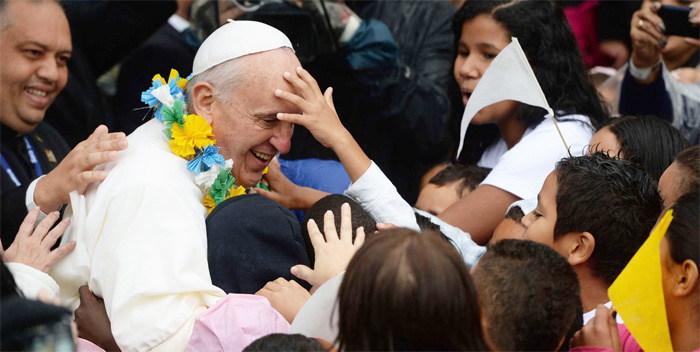 (Vatican Radio) Pope Francis made an unscheduled stop at a center for street children in Manila Friday shortly after celebrating mass in the Filipino capital. Vatican spokesman Federico Lombardi confirmed that the Pope visited a home for street children run by the ANAK-Tnk charitable foundation. Fr. Lombardi said the Pope spent almost a half an hour with some 320 children who celebrated his visit at the center with songs and dance, hugs and an exchange of brief words.

Fr. Lombardi said the children were gathered in the center’s courtyard for their meeting with Pope Francis. “It was a very moving moment,” said Fr. Lombardi. The children had prepared small gifts for the Holy Father, including a wooden image of Our Lady – a copy of the one displayed in the centre’s chapel, a photo of the Holy Sacrament amid rubbish for the adoration of group of scavengers, and a mosaic made by a child out of bits of colored paper.

The center is run by Fr. Mathieu, a French priest, and is home to 20 children while many of the others gathered to greet the Pope are assisted by the foundation in other homes.

Anak-TNK launched the letter-writing campaign “Even us?” last September requesting a visit from the Pope. Cardinal Luis Antonio Tagle, archbishop of Manila, brought a thousand letters from the children, plus a video about the lives of street children, to Pope Francis in Rome at the beginning of October last year.

Concluding his visit with the children with a blessing, Pope Francis went on to have lunch at the nunciature in Manila before an afternoon meeting with families.

You can see more of the great work Anak-TNK is accomplishing by visiting their website and watching their videos by clicking here.