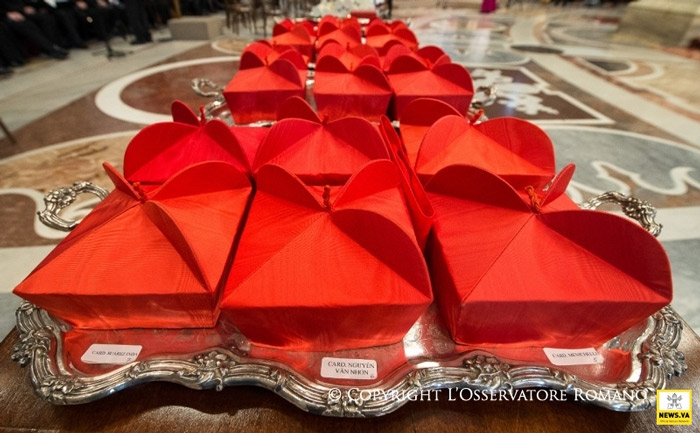 (VIS) – At 11 a.m. today in the Vatican Basilica, Pope Francis celebrated an Ordinary Public Consistory during which he created twenty new cardinals, to whom he imposed the biretta, consigned the ring and assigned the title or diaconate church.

The celebration was also attended by Pope emeritus Benedict XVI, whom Pope Francis embraced upon entering the basilica. He was also greeted by Cardinal Dominique Mamberti, prefect of the Supreme Tribunal of the Apostolic Signatura who, as first among the new cardinals, addressed some words of thanks to the Holy Father on behalf of all. “Becoming part of the College of Cardinals places us in a particular way in the history and life of the Church of Rome that – according to St. Ignatius of Antioch’s beautiful phrase – presides in charity. We are invited to come out of ourselves, of our habits and comforts, in order to serve the mission of this Church, aware that this implies having a broader horizon”. Cardinal Jose de Jesus Pimiento was unable to attend on account of his advanced age, and so he will receive the biretta in Colombia.

In the homily he pronounced before the new cardinals, the Pope chose as a guide the hymn to charity from St. Paul’s first Letter to the Corinthians, and emphasized that charity must always preside over their ministry.

“The cardinalate is certainly an honor, but it is not honorific”, he began. “This we already know from its name – ‘cardinal’ – from the word ‘cardo’, a hinge. As such it is not a kind of accessory, a decoration, like an honorary title. Rather, it is a pivot, a point of support and movement essential for the life of the community. You are ‘hinges’ and are ‘incardinated’ in the Church of Rome, which ‘presides over the entire assembly of charity’”. 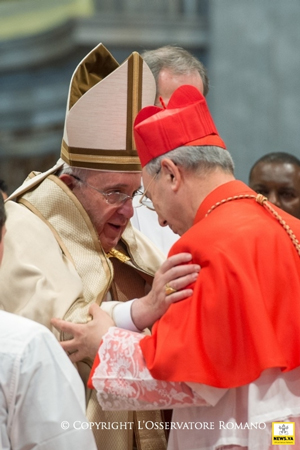 In the Church, “all ‘presiding’ flows from charity, must be exercised in charity, and is ordered towards charity. Here too the Church of Rome exercises an exemplary role. Just as she presides in charity, so too each particular Church is called, within its own sphere, to preside in charity. For this reason, I believe that the ‘hymn to charity’ in St. Paul’s first letter to the Corinthians can be taken as a guiding theme for this celebration and for your ministry, especially for those of you who today enter the College of Cardinals. All of us, myself first and each of you with me, would do well to let ourselves be guided by the inspired words of the apostle Paul, especially in the passage where he lists the marks of charity. May our Mother Mary help us to listen. She gave the world Jesus, charity incarnate, who is ‘the more excellent Way’; may she help us to receive this Word and always to advance on this Way. May she assist us by her humility and maternal tenderness, because charity, as God’s gift, grows wherever humility and tenderness are found.

“St. Paul tells us that charity is, above all, ‘patient’ and ‘kind’”, remarked the Holy Father. “The greater our responsibility in serving the Church, the more our hearts must expand according to the measure of the heart of Christ. ‘Patience’ – ‘forbearance’ – is in some sense synonymous with catholicity. It means being able to love without limits, but also to be faithful in particular situations and with practical gestures. It means loving what is great without neglecting what is small; loving the little things within the horizon of the great things, since ‘non coerceri a maximo, contineri tamen a minimo divinum est’. To know how to love through acts of kindness. ‘Kindness’ – benevolence – means the firm and persevering intention to always will the good of others, even those unfriendly to us. 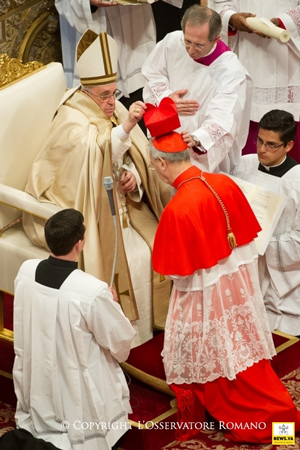 “The Apostle goes on to say that charity ‘is not jealous or boastful, it is not puffed up with pride’. This is surely a miracle of love, since we humans – all of us, at every stage of our lives – are inclined to jealousy and pride, since our nature is wounded by sin. Nor are Church dignitaries immune from this temptation. But for this very reason, dear brothers, the divine power of love, which transforms hearts, can be all the more evident in us, so that it is no longer you who live, but rather Christ who lives in you. And Jesus is love to the fullest.

“St. Paul then tells us that charity ‘is not arrogant or rude, it does not insist on its own way’”, continued Pope Francis. “These two characteristics show that those who abide in charity are not self-centred. The self-centred inevitably become disrespectful; very often they do not even notice this, since ‘respect’ is precisely the ability to acknowledge others, to acknowledge their dignity, their condition, their needs. The self-centred person inevitably seeks his own interests; he thinks this is normal, even necessary. Those ‘interests’ can even be cloaked in noble appearances, but underlying them all is always ‘self-interest’. Charity, however, makes us draw back from the centre in order to set ourselves in the real centre, which is Christ alone. Then, and only then, can we be persons who are respectful and attentive to the good of others.

“Charity, Saint Paul says, ‘is not irritable, it is not resentful’. Pastors close to their people have plenty of opportunities to be irritable, to feel anger. Perhaps we risk being all the more irritable in relationships with our confreres, since in effect we have less excuses. Even here, charity, and charity alone, frees us. It frees us from the risk of reacting impulsively, of saying or doing the wrong thing; above all it frees us from the mortal danger of pent-up anger, of that smoldering anger which makes us brood over wrongs we have received. No. This is unacceptable in a man of the Church. Even if a momentary outburst is forgivable, this is not the case with rancor. God save us from that! 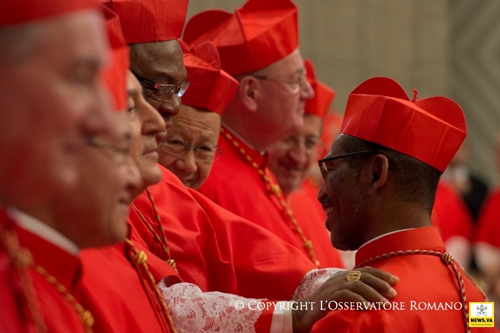 “Charity – St. Paul adds – ‘does not rejoice at the wrong, but rejoices in the right’. Those called to the service of governance in the Church need to have a strong sense of justice, so that any form of injustice becomes unacceptable, even those which might bring gain to himself or to the Church. At the same time, he must ‘rejoice in the right’. What a beautiful phrase! The man of God is someone captivated by truth, one who encounters it fully in the word and flesh of Jesus Christ, the inexhaustible source of our joy. May the people of God always see in us a firm condemnation of injustice and joyful service to the truth”.

“Dear brothers, this comes to us not from ourselves, but from God. God is love and he accomplishes all this in us if only we prove docile to the working of his Holy Spirit. This, then, is how we are to be: ‘incardinated’ and docile. The more we are ‘incardinated’ in the Church of Rome, the more we should become docile to the Spirit, so that charity can give form and meaning to all that we are and all that we do. Incardinated in the Church which presides in charity, docile to the Holy Spirit who pours into our hearts the love of God. Amen”.
Following his allocution, the Pope pronounced the formula for the creation of the new cardinals, their name and the titular diaconate or church assigned to them. The new cardinals recited the Creed and their oath of fidelity and obedience to the Holy Father and his successors. They subsequently received the biretta and the ring from the Pope, who also assigned them their title or diaconate. 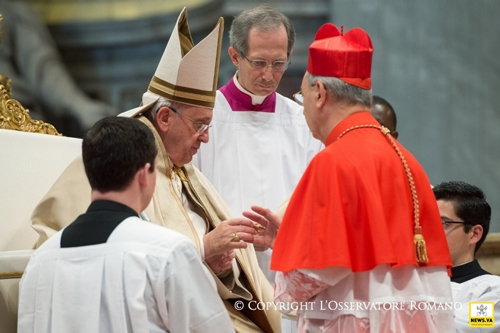 At the end of the rite, Cardinal Angelo Amato S.D.B., prefect of the Congregation for the Causes of Saints, addressed the Holy Father to request that three Blesseds be inscribed in the Book of Saints. The first, Jeanne-Emilie de Villeneuve, was born in France in 1811, and founded the Congregation of the Sisters of the Immaculate Conception of Castres for the education of poor girls and young women, for the sick, and for missions in distant lands. She died in 1854 and was beatified by Benedict XVI in 2009. The second, Marie-Alphonsine Danil Ghattas (nee Maryam Sultanah) was born in Jerusalem in 1843 and carried out an intense apostolate in favour of Christian mothers and the young. Co-foundress of the Congregation of the Sisters of the Holy Rosary of Jerusalem of the Latins, she died in 1927 and was beatified by Benedict XVI in 2009. Finally, Mary of Jesus Crucified (nee Maryam Baouardy), born in Abellin near Nazareth in 1946, was a professed nun of the Order of Discalced Carmelites, and was sent to found the new Carmelites first in India and later in Bethlehem, where she died in 1878. She was beatified by St. John Paul II in 1983.