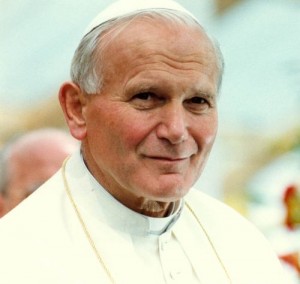 Saint John Paul II explained, “Pilgrimages, a sign of the condition of the disciples of Christ in this world, have always held an important place in the life of Christians. In the course of history, Christians have always walked to celebrate their faith in places that indicate a memory of the Lord or in sites representing important moments in the history of the Church. They have come to shrines honoring the Mother of God and to those that keep the example of the saints alive. Their pilgrimage was a process of conversion, a yearning for intimacy with God and a trusting plea for their material needs. For the Church, pilgrimages, in all their multiple aspects, have always been a gift of grace” (Pilgrimage in the Great Jubilee).

Pope St. John Paul II entered into eternal life on April 2, 2005, but upon his beatification, his feast day was established as October 22. Normally, feast days are established on the day of the saints’ death, but October 22 is the anniversary of this great Saint’s papal inauguration Mass. This adaptation was made because April 2 often occurs during the solemn period of Holy Week, during which feast days are not celebrated, and the Vatican wanted to guarantee that his feast day would be able to be commemorated every year.

As the third-longest reigning pope in history, and one of the first to reign during the modern travel era, Pope St. John Paul II had numerous opportunities to both make pilgrimages (he visited 129 countries during his pontificate) and receive pilgrims. Over 17 million pilgrims attended his General Audiences and millions of youth travelled all over the globe to meet him and celebrate with him at World Youth Days.

In 1979, Pope John Paul II went on pilgrimage to his native Poland. During the 8-day visit, around 13 million people (one-third of the population of Poland) pilgrimaged with him and came out to greet him. Millions more have travelled to Poland since, for a glimpse into the life of this Saint and also to experience the Catholicity of the most-Catholic country in Europe. One can visit JPIIs birthplace, the churches where he was baptized, received his first Holy Eucharist, celebrated his first Mass, and served as priest, bishop, and cardinal. There are also shrines to Our Lady in Czestochowa and Divine Mercy in Lagiewniki. Pilgrims can attend Mass in the salt mine chapels at Wieliczka, intricately carved by the miners to express their devotion to the faith. The official Poland Travel website boasts over 200 various sanctuaries throughout the country – making Poland a country well worth visiting.

Pilgrims do not have to travel to Europe to encounter the life and person of this great man. The Saint John Paul II National Shrine for the United States is found in Washington DC, near the Catholic University of America and the Basilica of the National Shrine of the Immaculate Conception. This shrine has a permanent collection about the Life of St. John Paul II and holds daily Masses and opportunities for the veneration of first-class relics of this beloved father.

Tekton Ministries recently had pilgrims return from WYD in Krakow, a pilgrimage that included visits to other sites in Poland as well as trips to Prague or Rome. We also coordinate groups on other pilgrimages to Poland and the rest of Eastern Europe, where the early years of JPII come alive and pilgrims are immersed in the Catholic culture of this beautiful land. In addition, Tekton can help your parish or other group coordinate a pilgrimage to our own shrines and holy places right here in the US. Please look at our website or call our office for more details.