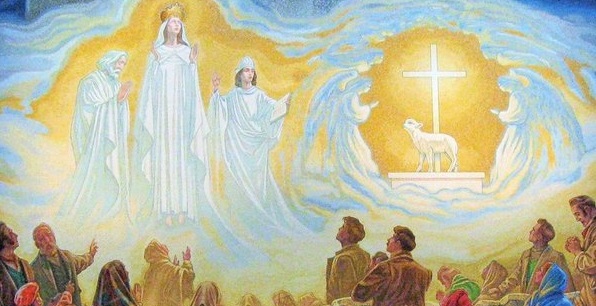 “I remember it as well as I do last night.” Those were the words of an aged Irish immigrant named John Curry in 1940s New York, who had seen the apparitions at Knock, Ireland when just a boy.

Now, his remains will be re-interred at St. Patrick’s Old Cathedral in New York City.

“Like most of the witnesses, John Curry went on to live out his life in a quiet way, never highlighting what he experienced in Knock, unless asked to speak about it,”

Father Richard Gibbons, rector of Ireland’s Our Lady of Knock Shrine, told CNA. “This shows a quiet, humble kind of faith which was characteristic of the Irish people.”

“He served Mass every day right up to his death and had an unwavering devotion to Our Lady and said that she never refused him anything that he asked for,” the priest said.

Cardinal Timothy Dolan of New York will celebrate an 11 a.m. Mass of Thanksgiving May 13, followed by Curry’s reburial on the church’s grounds in Manhattan. 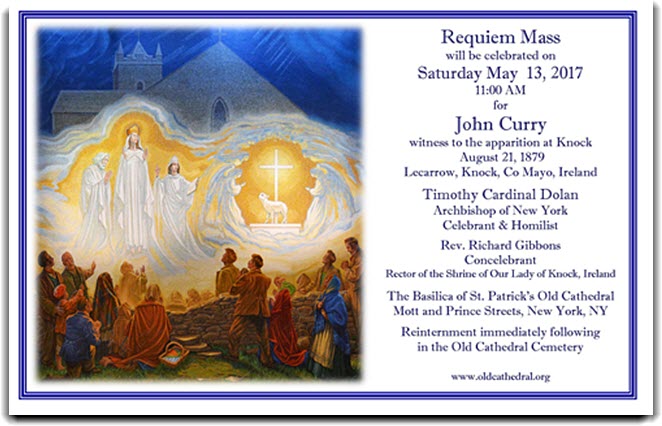 The apparition took place on the evening of Aug. 21, 1879 in the presence of fifteen men, women, and children, mainly from the village of Knock in County Mayo. They ranged in age from 5 to 74 years old.

Some of the witnesses reported figures that appeared to be the Virgin Mary, St. Joseph and St. John at the parish church’s gable wall. Amid luminous lights, they saw the figure of a lamb and a cross on an altar. In the pouring rain, the witnesses stayed, praying the rosary.

When the Church launched an official inquiry in October 1879, young John Curry’s testimony was among the fifteen official witness testimonies. His first account is brief.

“The child says he saw images, beautiful images, the Blessed Virgin and St. Joseph,” said the document, posted on the Knock shrine’s website. “He could state no more than that he saw the fine images and the light, and heard the people talk of them, and went upon the wall to see the nice things and the lights.”

Curry emigrated to New York in 1897 at the age of 25. He worked as railway laborer near Milwaukee, then moved to New York in the 1920s. He then worked as an attendant at the City Hospital on what is now New York’s Roosevelt Island.

He never married. When his health began to decline, he moved to live with the Little Sisters of the Poor on Long Island. Not until shortly before the second inquiry began did he tell the sisters he was one of the witnesses to the apparition at Knock.

Curry died in the care of the Little Sisters of the Poor in Manhattan in 1943, aged 69. He was buried in an unmarked grave at Pine Lawn Cemetery on Long Island.

The modern-day rector of the shrine, Fr. Gibbons, spoke about Curry’s unmarked grave to Cardinal Dolan when the cardinal led a 2015 pilgrimage to Knock.

Initially, he asked the cardinal to help bless the grave when a gravestone was provided.  The cardinal then offered to bring Curry’s remains to St. Patrick’s Cathedral. When this proved impossible, the grounds of the historic cathedral was chosen.

In an unusual reversal, 130 pilgrims will be flying from Knock to New York City. Their numbers include some of Curry’s relatives.

Today, Knock is the National Marian Shrine of Ireland and hosts the largest pilgrimage in the country. The shrine is surrounded by gardens with five churches.

“Pilgrims often comment on the great sense of peace that they experience here,” Fr. Gibbons said.

The National Novena to Our Lady of Knock takes place Aug. 14-22 every year, bringing guest speakers, workshops for pilgrims, and a candlelight rosary procession around the shrine grounds each evening.

Tekton Ministries sends pilgrims to Knock in Ireland every year. For more information or to see upcoming pilgrimages visit our website.

Excerpt from the Catholic News Agency article: Enduring devotion: the Irish immigrant who never forgot Our Lady of Knock