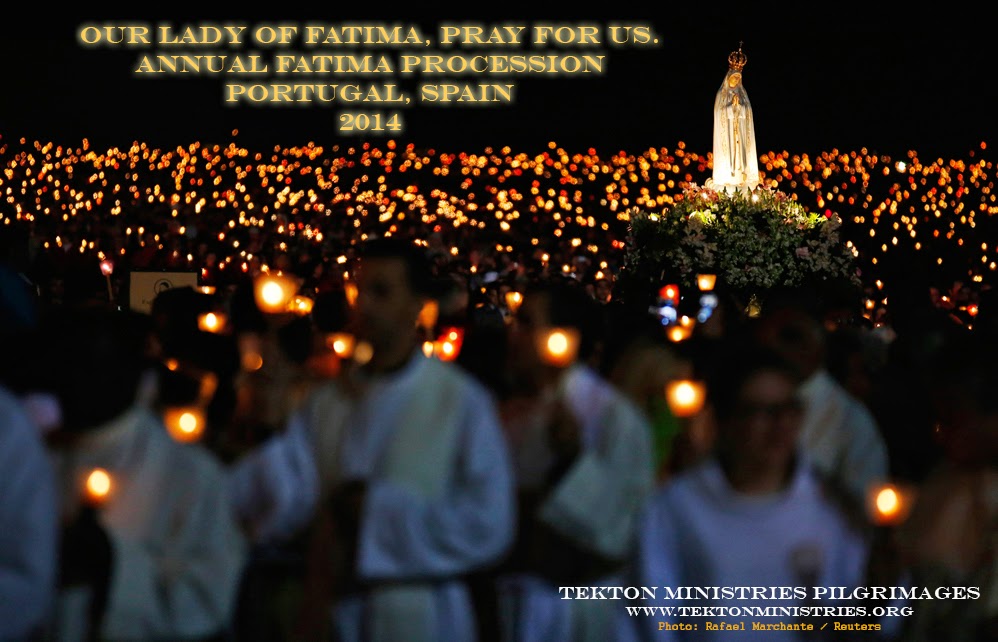 Tekton Ministries
www.thrivingparish.org/
(317) 574-4191
Each year thousands upon thousands turn out for the annual process of the statue that represents the Church-approved apparitions of Our Lady of Fatima. Below is a sample itinerary of a Tekton pilgrimage that traveled to both Fatima, Salamanca and Madrid.
Pilgrimages are tailored to the desires of each priest leading the pilgrimage and can be customized to fit the group’s needs. Please contact us if you have questions or would like to book a pilgrimage to Fatima or any other Catholic destinations.

Day 1: Depart U.S.A.
Our spiritual journey begins as we depart on our transatlantic flight to Lisbon.

Day 2: Arrive Lisbon
Upon arrival in Lisbon, we will be met by our tour escort and transfer to our hotel. The remainder of the day is free.

Day 3: Lisbon / Santarem / Fatima
Today we will explore Lisbon including visits to the ancient Moorish Alfama Quarter, Jerónimos Monastery, the birthplace of St. Anthony of Padua (the patron saint of Portugal), Lisbon Cathedral, the Tower of Belém, Black Horse Square, and the Monument to the Discoveries. Then depart Lisbon and drive north to Santarem for Mass at the Church of St. Stephen, famous for its venerated relic, “the Bleeding Host”. Continue our drive north to Fatima.

Day 4: Fatima
Today, celebrate Mass on the spot where Our Lady appeared at the Chapel of Apparitions. Visit the Basilica to see the site of Francisco and Jacinta’s graves and then on to the hamlet of Aljustrel where the three children who witnessed the Apparitions lived at the time. Continue to Valinhos, the site where Our Lady appeared following the children’s release from prison. This evening participate in the Stations of the Cross along the Via Sacre, site of the first Apparition.

Day 5: Fatima / Salamanca
This morning leave Portugal for Spain. En route we will stop in Coimbra, a famous university town, to visit the Convent of Santa Clara La Nova where sister Lucia resided until her death in 2005.  Continue on across the Portuguese-Spanish border to Salamanca, one of Spain’s foremost cultural centers, a great university city and a showcase of intricately sculpted Renaissance architecture in golden stone.

Day 6: Salamanca / Madrid
After breakfast depart Salamanca for Alba de Tormes to visit the Carmelite Convent which contains St. Teresa’s incorrupt arm and heart. Continue to the walled city of Avila, the birthplace of St. Theresa. Visit the Monastery of the Incarnation where St. Teresa spent many years of her life, then to the Monastery of St. Joseph, her first foundation. Continue to Segovia whose cathedral is considered the last great Gothic church in Spain. Here we will pay our respects to another great Carmelite, St. John of the Cross who served as spiritual director to St. Theresa of Avila. Drive on to Spain’s capital, Madrid.

Day 7: Madrid
This morning’s city tour of Madrid will show some of the history and tradition of Spain, including the Prado Museum – with its masterpieces of El Greco, Goya, and Velasquez, the Royal Palace, the University with Cervantes’ monument, Puerta del Sol and the Retiro Park. The remainder of the day is free.

Day 8: Madrid / U.S.A.
Transfer to the airport for our return flight home.