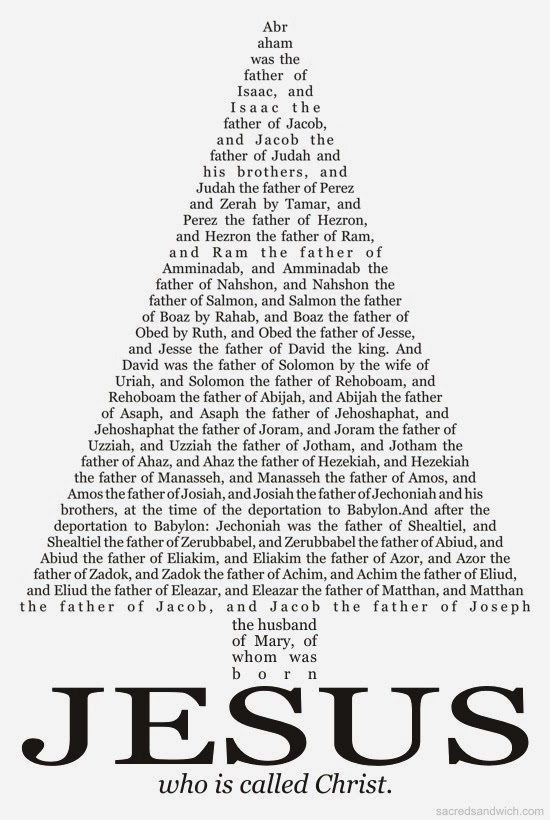 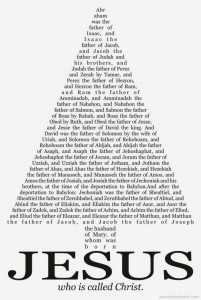 Several years ago the director of an RCIA program in the Omaha Archdiocese was taken aback by a candidate who said “You’ve been telling us about Jesus. I came here to learn about the Church . . .”  The Christian church indeed has organizational features – rites and rules – just like any human social grouping, and one ought to know something about them. But the Church is not about itself (what Pope Francis refers to as “self-referential”). It is about Jesus. It is an assembly of people who have committed their lives to Jesus, to being Jesus’ presence in their world. As Vatican II said, the Church is the sacrament of Christ for the world.
In his gospel St. Matthew is telling his early Christian community about Jesus. Interestingly the word our lectionary translates as “genealogy” is, in the original Greek, “genesis” – the same as the name of the first book of the Bible. This is the beginning of the story of Jesus. Matthew says that, in Jesus, God has made a new creation, a new Adam. He starts his story with Abraham. 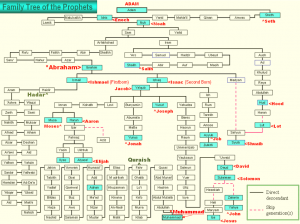 It’s a curious family tree – consisting of saints, sinners, petty oriental potentates, wastrels, incompetents, womanizers. It even mentions five women (distinctly unusual in ancient genealogies) – some of them pregnant under irregular circumstances. Is this how God enters into human affairs?  The list of 42 names in Matthew’s genealogy traces Israel’s journey into Egypt and back, God’s rescue of an enslaved people, the triumphs and failings of the monarchy, the exile into Babylon and subsequent rescue, the rebuilding of Jerusalem, only to be conquered by Greek and then Roman invaders. It’s all there. If only we knew our Bible history! What stories those names would evoke!  As has been said, “God writes straight with crooked lines”. 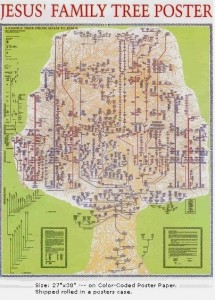 Matthew knew that his community could not really understand Jesus if they did not understand that chain of God’s interactions with Israel. Israel was a chosen people, not in the sense of having been granted special privilege (though they certainly experienced that), but chosen precisely to manifest to the world in concrete actions and events who God is and what God’s will for God’s creation really is. That’s exactly what Jesus is and does. And that’s how he is the fulfillment of that first 2000 year history.

In eight days we will celebrate once again the birth of baby Jesus. Babies are promise, they are potential, they are hope. This baby shows us God, a God who takes on our human nature in all its failings and tawdriness and, by making it possible for us humans to share in the divine, what the potential in every human being really is.
(Adapted from Robert P. Heaney)