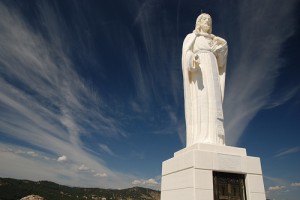 Today we ascended the foothills of the Rocky Mountains to the Mother Cabrini Shrine in Golden, CO. Rising out of the city after these last two weeks of intensive missionary training, I had no idea what awaited us at the top of the mountain. When we pulled out of the cliff side drive onto the ridge, the building before us looked like a standard convent-gone-retreat house, a place set apart from the ant-city below that created its own weird, disconnected existence. Not being a fan of retreats, I had braced my self for the out-of-life experience that would be a mountain top day (pun intended) but bore little relevance to my normal routine. There was an interesting room in the gift shop containing object from the life of Mother Cabrini, but it was caged off in glass. My suspicions were confirmed. This was a wonderfully peaceful place, preserved as a sanctuary from the rest of the world, but as such, saw only the faces of pilgrims and tourists on sabbatical from the city.

It was one small desk that brought that idea low. In the corner of the retreat house, under the watchful eye of a peeling, plaster statue of Mama Cabrini herself, stood a desk and a chair that looked old and well used by many a retreat house guest. As I needed to scribble a quick note I sat down to use the pencil in the corner and my eye landed on the plaque, “This desk and chair used by Saint Francis Xavier Cabrini. Work in peace.”

This was no caged, inanimate object, this was a living relic. A saint had sat here year after year as she strove to provide a home filled with beauty and dignity for the orphaned girls of Denver, CO atop the glorious mountain. The miraculous spring down the path from me was no anonymous work of nature, but a source of life given to a specific community, at a specific point in time, for a specific purpose. In realizing the touch of the sacred that I was brushing up against, I realized something even greater: the ordinary nature of the mystic. Mother Cabrini is a saint, but she is firstly an everyday person, a human who came from the city below to sit and write at this desk day after day. She struggled to provide for her girls, to maintain hope in dire situations, to wake up for morning prayer! Everything about her, from her desk to her miracles was distinctly human and distinctly sacred.

As we drive back down the mountain, I wonder where I will next encounter this reality. In my work with the school children of Denver? In my life of community with my fellow missionaries? I don’t know. I do know that Mother Cabrini lived and worked in human holiness. Moreover, I know that even as she was called to this work, I have been called to this work, for we are each called to the work of human holiness. That place atop the mountain is truly holy, literally “set apart,” but this is the greatest relevance of all. To be set apart for a purpose known only to God, is that not why I came to Denver in the first place? Christ, incarnate of the Virgin Mary, descended into humanity and by such elevated humanity to holiness. This road down the mountain is no mere descent into the ordinary but an assumption of my daily life into the sacred nature of real, true, hardwood sainthood.