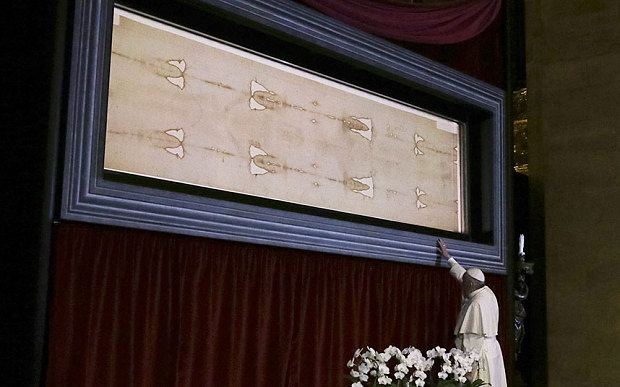 (CNS) It took place in silence and lasted only a few minutes, but Pope Francis’ time of prayer and contemplation before the Shroud of Turin was marked with gestures of reverence and tenderness.

Revered by many as the burial cloth of Jesus, the shroud was the second stop on the pope’s packed itinerary for his two-day visit to the northern Italian town of Turin.

The pope did not give a speech June 21 in the Cathedral of St. John the Baptist, where the shroud is housed, but he described it later as an icon of Christ’s great love for humankind.

“At the end of our celebration, our thoughts go to the Virgin Mary, loving mother and attentive to all her children, whom Jesus entrusted to her from the cross, while he offered himself in the greatest act of love. The icon of this love is the shroud,” Pope Francis said before reciting the midday Angelus prayer.

“The shroud draws (us) to the face and martyred body of Jesus and, at the same time, impels us toward the face of every suffering and unjustly persecuted person. It impels us in the same direction as Jesus’ gift of love,” he said, making reference to the words of St. Paul.

After his first meeting in Turin, a gathering in a public square with thousands of people from the world of work, Pope Francis walked to the cathedral nearby. He entered the church at 9:15 a.m. and walked directly toward the shroud, which had been on public exhibit since April 19.

The pope stood before the shroud for about 20 seconds, then crossed himself before settling into a wooden armchair, set several feet from the shroud. He sat in dim lighting and in silence, with his head bowed for several moments. He crossed himself again before approaching the shroud, stopping only a few feet away. He stood there, contemplating it for another 20 seconds or so, before walking right up to its case, touching it gently and crossing himself again. 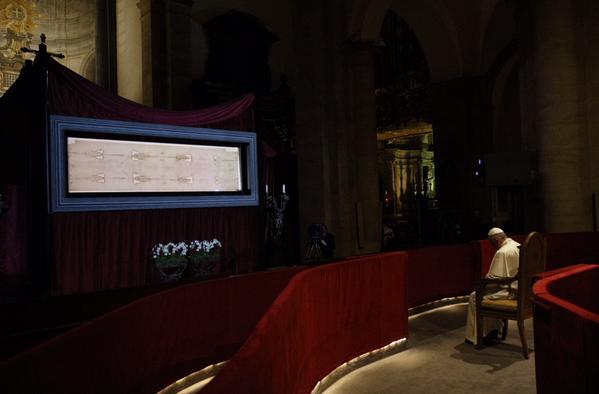 He then prayed before a side altar in the cathedral, the location of the tomb of a native of Turin, Blessed Pier Giorgio Frassati, who died at age 24 after a short life dedicated to helping the poor.

The pope then celebrated an outdoor Mass in one of Turin’s central squares, Piazza Vittorio. Officials estimated the crowd at 100,000 people.

During his homily, the pope reflected on three aspects of the love of God. God’s love is faithful, re-creates all things anew, and is stable and sure, he said.

On the first aspect, the pope said God’s love does not disappoint and never fails and is incarnate in Jesus.

“For love, he became man; for love, he died and resurrected; for love, he is always at our side, in beautiful moments and in difficult ones. Jesus loves us always, until the end, without limits and without measure. And he loves all of us to the point that we each can say, ‘He gave his life for me.’ For me,” he said.

“The faithfulness of Jesus does not give up even in the face of our own unfaithfulness,” he added.

A person experiences the ability of God’s love to re-create when one realizes his or her own mistakes, sins and weakness and opens up to the forgiveness and love of Jesus, the pope said.

“The spirit of the world is always searching for newness, but only the faithfulness of Jesus is capable of true newness, of making us new people, of re-creating us,” he said.

The day’s Gospel reading about Jesus calming the storm on the Sea of Galilee demonstrates the third aspect: the stability and sureness of God’s love, said the pope.

When people feel they are unable to go on, he said, Jesus offers them “the rock of his love, onto which each person can grasp, certain they will not fall.”

“How many times have we felt that we cannot go on,” the pope said. “But (Jesus) is always beside us, with an extended hand and an open heart.”

The pope then urged the faithful to reflect on whether they are living on the “rock” of God’s love. People, including even Christians, run the risk of forgetting God’s love and of feeling “paralyzed by fears of the future and seeking security in passing things or in models of closed societies that tend to exclude more than to include,” he said.

He prayed that the Holy Spirit would help make Christians aware of the constant and faithful love of God, “to face life with courage and to look at the future with hope.”

“The peace that (God) gives us is for everyone,” he said, “even for the many brothers and sisters who are fleeing wars and persecution in the search of peace and freedom.”

The pope’s two most recent predecessors also visited the shroud: Pope Benedict XVI in 2010, calling it the “icon of Holy Saturday,” and Pope John Paul II in 1998. The shroud is expected to be on public display until June 24.