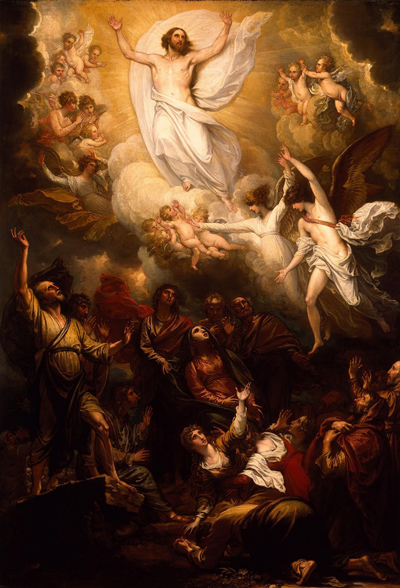 (Word on Fire, Fr. Robert Barron) We tend to read the Ascension along enlightenment lines, as if Christ has gone to a distant, irrelevant place. The biblical reality is this: Jesus, in ascending into heaven, has not gone “up, up, and away.” Rather, he has gone to heaven to direct operations more fully here on earth. Jesus has not abandoned earth, but rather, he intends to return in order to bring about the full reconciliation of heaven and earth. In the mean time, he has commissioned his follows to begin that work now… within the Church.

“The days between the resurrection and the ascension of the Lord”

Beloved, the days which passed between the Lord’s resurrection and his ascension were by no means uneventful; during them great sacramental mysteries were confirmed, great truths revealed. In those days the fear of death with all its horrors was taken away, and the immortality of both body and soul affirmed. […]

The blessed apostles together with all the others had been intimidated by the catastrophe of the cross, and their faith in the resurrection had been uncertain; but now they were so strengthened by the evident truth that when their Lord ascended into heaven, far from feeling any sadness, they were filled with great joy.

Indeed that blessed company had a great and inexpressible cause for joy when it saw man’s nature rising above the dignity of the whole heavenly creation, above the ranks of angels, above the exalted status of archangels. Nor would there be any limit to its upward course until humanity was admitted to a seat at the right hand of the eternal Father, to be enthroned at last in the glory of him to whose nature it was wedded in the person of the Son.