(CNA/EWTN News, by By Blanca Ruiz).- On August 1, the oldest priest in the Diocese of Malaga, Spain turned 100 years old. After a century of life, Father Francisco Acevedo says he still has important work to do.

“St. Peter says: ‘Be sober and keep watch, because the devil as a roaring lion walks about, seeking whom he may devour,” said Fr. Acevedo in an interview published by the Bishop of Malaga.

“I still have to resist the devil, but it’s not easy. The devil does not want there to be holy priests, and it’s dangerous to not take this seriously,” he said when asked about his ongoing task.

Now living in residence at St. Patrick’s parish, the priest says he has led a normal life and does not have any “tricks” to such a long life. 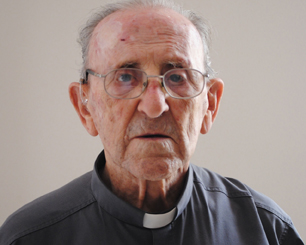 Having spent most of the last century as a priest, Fr. Acevedo offered some advice to seminarians and young priests: “Seek God alone.”

He also stressed the importance of prayer, saying that it “is everything” to him and is “a permanent guard.”

Fr. Acevedo tried to be faithful in prayer, and highlighted Mary’s faithfulness in always praying for her children.

Those who see prayer time as taking away from other activities “do not know what it means to be Christian,” he continued. “They might have heard something about him, but they do not know Jesus. If they knew him, they would seek.”