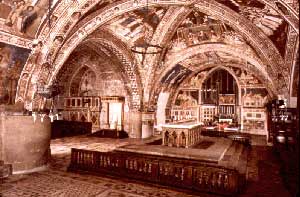 Pope Francis is headed to his namesake’s hometown. When? Why, the patron’s feast day of course- October 4, 2013.

On a related note, since being elected I’ve wanted to know the story behind the Pope’s choice of the name Francis.  It comes to us in his own words in an article published by Zenit.  The articles concerning his pilgrimage and his name happen to be the same.

After his election, Pope Francis explained in his first audience with journalists in Rome, why he chose the name of the “Poor One of Assisi.” Upon confirmation that he had received the majority of votes to the papacy, Cardinal Claudio Hummes, Archbishop Emeritus of Sao Paolo and friend of the Holy Father, told the newly elected Pope: “Don’t forget the poor.”