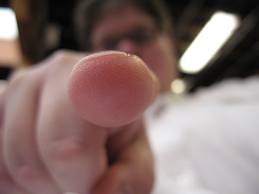 Only once did Moses forget his own story and where he came from.  And for that he was punished by God and no longer able to lead his people, after 40 years, into the promised land.  Moses, taken up out of the water, lucky to be alive, grows up well but then commits murder.  God later calls him and empowers him to work miracles.  Claiming as his own the power of God, because of his lack of patience, he exalts himself and condemns others while working God’s miracle in his own name.
Self-righteousness is no little thing.
What happens to the self-righteous in the Gospel? Jesus says of Capernaum, the town know as “home” during his Galilean ministry, “And as for you, Capernaum: ‘Will you be exalted to heaven? You will go down to the netherworld.’”  (That might be where my Irish grandmother, brogue-and-all, got the staying, “Ah, to hell with them.”)  Pretty strong words.
We never really know where people are or what they’re going through, especially when they make decisions that confound us.  It might just be that when they’re feeling like the Psalmist, “I am sunk in the abysmal swamp where there is no foothold; I have reached the watery depths; the flood overwhelms me,” they need more compassion and understanding, not less.
Better to default to mercy then to self-righteousness and condemnation.  The last thing you’d want to hear at the moment of death is Jesus saying what he said to Capernaum, brogue-and-all, “Ah, to hell with ya.”